The US becoming truly “indivisible” 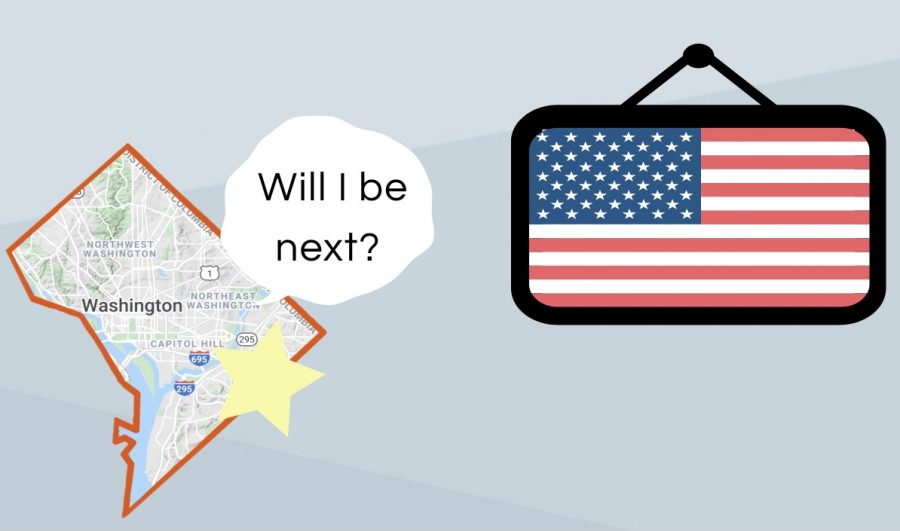 Graphic which represents Washington D.C.'s fight to achieve statehood, thereby changing the image of the nation and its government.

62 years ago, the United States welcomed the state of Hawaii into its union as the 50th state. Since then, it can be mind blowing for most to hear that there is a discussion for Washington D.C., to become the 51st state of the United States.

According to The Washington Post, the House of Representatives voted in favor for D.C. to receive statehood on April 22. Although D.C. got votes in the House of Representatives in favor of its statehood, this doesn’t mean the same will happen in the Senate. This is due to the fact that Democrats want D.C. to become a state while Republicans are against this movement.

In order for D.C. to pass in the Senate as a state, according to The Washington Post, D.C. must have 60 votes in favor. But it’s not that simple. Despite Democrats taking control of half of the senate seats, and vice president Kamala Harris being the tiebreaker, there is still the condition that at least 10 of the votes must be Republican, this is known as the Senate Filibuster.

Unless the Senate agrees to change the Filibuster to be in favor of getting D.C. to statehood or if the Democrats get 10 Republican votes, it is unlikely that it will not pass.

There are many reasons why many people are arguing about whether or not it is right for D.C. to become its own state. The main reason for Democrats, according to The Washington Post, wanting D.C. as a state is because it is likely to elect Democratic Senators and vote blue in future elections.

Republicans, according to the Daily Caller, are against D.C. becoming a state because they believe it will tip the balance of power even more towards the Democrats.

Democrats and Republicans know that the potential state will most likely go blue because of the results of the 23rd amendment. According to Interactive Constitution, this amendment passed in 1960, allowed D.C. to be represented in presidential elections with their own electoral colleges, but still not have senators to represent them. According to Ballot Pedia, the district voted for democratic presidential nominees, and till this day the district still shows signs of leaning towards democratic ideals.

There is no telling when the Senate will make their final decision, however, the people of D.C. are continuing to advocate for statehood.

According to statehood.dc.gov., the district has met all the necessary criteria to be considered as a state except for being represented in the senate. The district pays more in taxes than 22 states combined and more per capita than any state to the federal government. This has led over 5 million residents of D.C. to believe that they are not being represented equally within their democracy.

Even though the decision for D.C. becoming a state is unforeseen, many curious citizens have begun to wonder what will happen to the United States flag and the capital’s name.

Although there is no concrete design for new American flag to fit star 51, according to Flag Institute, there are three designs in consideration.

As for a state name, according to The Washington Post, the proposed name is “State of Washington, Douglas Commonwealth”. This name would represent the first president of the United States while still reflecting on America’s racist past by including American abolitionist  Fredrick Douglas’ name in the state name as well.

Although there is no clear answer concerning whether or not D.C. will achieve statehood, Americans can rest assured that it will be a while before we could potentially have to memorize any new state names.