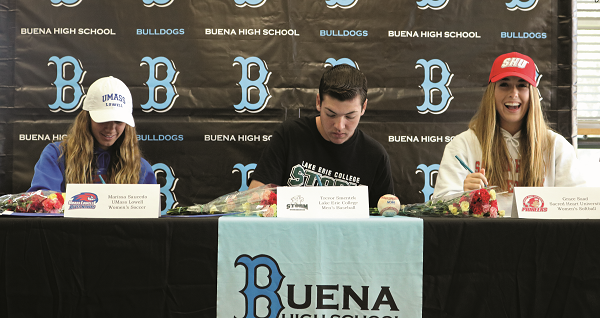 Grace Saad, Trevor Smentek and Marissa Saucedo sign their scholarship documents on Feb 5, 2020 at the Buena High School Library in front of faculty, family and friends.

Seniors Grace Saad, Trevor Smentek and Marissa Saucedo, who all received athletic scholarships celebrated a special National Signing Day on Wednesday Feb 5, 2020. The scholar athletes were accompanied by family, friends, coaches, teachers and administrators in the HUB and they signed their letters of intent to attend and play their sport at the collegiate level.

At the beginning of the ceremony, athletics director Shaun Strople shared some statistics from the National Collegiate Athletic Association (N.C.A.A.) on the estimated percentage of students who advance on to playing their sport in college right after high school. There are  2.2% of high school baseball athletes going to compete in division two baseball,  2.4% for division one women’s soccer, and only 1.7% of high school softball athletes are moving on to compete in division one softball.

Smentek feels that the guidance counselors at Buena have played a pivotal role in shaping his desires and determination to put himself out there and apply to college. He is excited to “start a new chapter of his life with new opportunities” in Ohio and he also feels prepared for the move, because he has been doing a lot on his own for the past few years and taking on new responsibilities. When asked why he chose Lake Erie College, Smentek said, “I wanted to go to a smaller campus to focus on myself.” Smentek will be majoring in sports management and he is most looking forward to “seeing what real life is about.”

Saucedo, who has been playing soccer since the age of three, says her major is “a tossup between engineering, physical therapy, and maybe even becoming a teacher.” She is eagerly anticipating playing at University of Massachusetts at Lowell, because they have an international program so she will have the opportunity to play with women from all around the world who have “just as much as a passion for soccer” as she does.

Saad also wanted to go to a smaller school for a lower student to faculty ratio, because she relies heavily on having good relationships with her teachers. She will be double majoring in Math and Secondary Education. She is particularly thankful for teacher Aaron Torres for always checking in on her when she expressed to him how badly she wanted a scholarship. “He told me that if I wanted it I had to work for it and that he’d be there to guide me through that exciting time.” Saad said.

These student athletes have sacrificed much of their time and energy to perfecting their game while also keeping up with academic responsibilities. The signing ceremony was a rite of passage for those with athletic prowess and ambition, and was a recognition of their hard work paying off.