VIEWPOINT: Apathy could wipe out the monarch butterfly 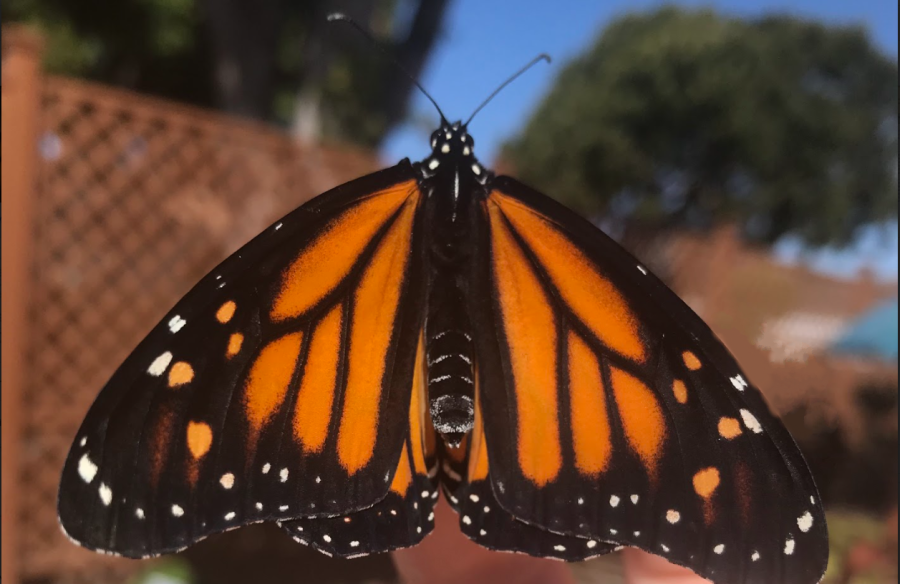 On the brink of extinction. Over the past 40 years, the monarch butterfly population has declined drastically. In 2020, the monarch was rejected from the endangered species list, despite meeting the requirements. The US Fish and Wildlife Service stated that this decision was made due to some other species having priority. “We may be witnessing the collapse of the western migration of monarch butterflies. A migration of millions of monarchs reduced to two thousand in a few decades. “ (Xerces Society)

The spectacle of thousands of orange butterflies fluttering through gardens and backyards is an anticipated sight in Southern California in late fall through spring: the annual monarch migration. Now, facing the consequences of habitat destruction and dangerous legislation, the monarch butterfly, a beloved icon, could be at risk for extinction. In order to save the monarch, we must change the way we approach this threatened species.

The monarch population stretches across North America congregating into two distinct populations separated by the rocky mountains. As caterpillars, the monarch exclusively feeds on milkweed, a toxic wildflower that derives its name from the white sap secreted when the plant is damaged.

Over the past 20 years, the milkweed population has declined rapidly. Alliance for Science explained that scientists theorize that this decline is due to the increased use of herbicides and weed killers in the Midwest.

According to the Alliance for Science “Glyphosate is used on most conventionally grown crops to control weeds and reduce tillage, as well as in roadside and ditch maintenance. Its application has contributed to the loss of milkweed.”

As milkweed is the only source of food for monarch caterpillars, this dramatic decrease in milkweed has had a devastating impact on the butterfly’s population. In 2020, the western monarch population reached an all time low at fewer than 2,000 according to National Geographic. They explained that this is, “a significant decline from roughly 30,000 documented in last year’s count and millions on the wing in the 1980s”.

Despite the desperate situation, the US Fish and Wildlife Service rejected monarchs from the endangered species list in 2020. This means that monarch habitats will not be federally protected and the butterfly will not receive a recovery plan. However, the agency has said that they will reevaluate its decision annually. 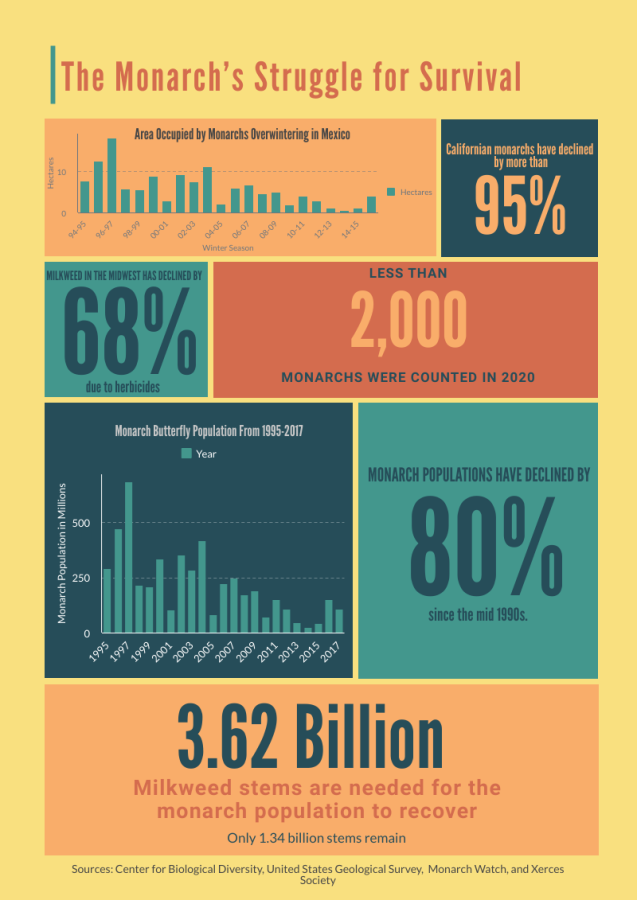 According to US Fish and Wildlife Service, “Listing the monarch as endangered or threatened under the Endangered Species Act is warranted, but precluded by higher priority listing actions.”

As much as the rolling hills and ocean views, the monarch is a staple in California. With these population swings, the need for protection has never been more urgent.”

I find this decision dangerous and distressing. While it is undeniable that there are many species in need of government protection, evidenced by over 1,300 species being listed on the endangered species act, I believe that the monarch should not be pushed aside. It is true that funds and resources are limited, but I believe that extending these funds to more species is worth the expense if we can save this butterfly.

In 2021, the western monarch population had a massive increase in population due to conditions such as favorable weather, lower pesticide use, more wildflowers, and more resources being available to fewer butterflies, the Public Broadcasting Station reported. However, experts remain concerned as a similar increase occurred in the East Coast population too .

“ [The eastern monarch’s] winter population covered more than six hectares in Mexico in 2019 and then quickly shrunk again by half.” (PBS)

Despite this uncertainty, it is undeniable that this current increase in population should be celebrated. It is a sign of hope for this beautiful butterfly that has been struggling for decades. But, we cannot stay idle. Citizens can help local monarchs by planting milkweed and wildflowers, and avoiding herbicides in their home gardens. As for the legislative side, we need to advocate for government protection, and as individuals it is our duty to take action.

As much as the rolling hills and ocean views, the monarch is a staple in California. With these population swings, the need for protection has never been more urgent. It is now time for us to take responsibility before this magnificent butterfly disappears.