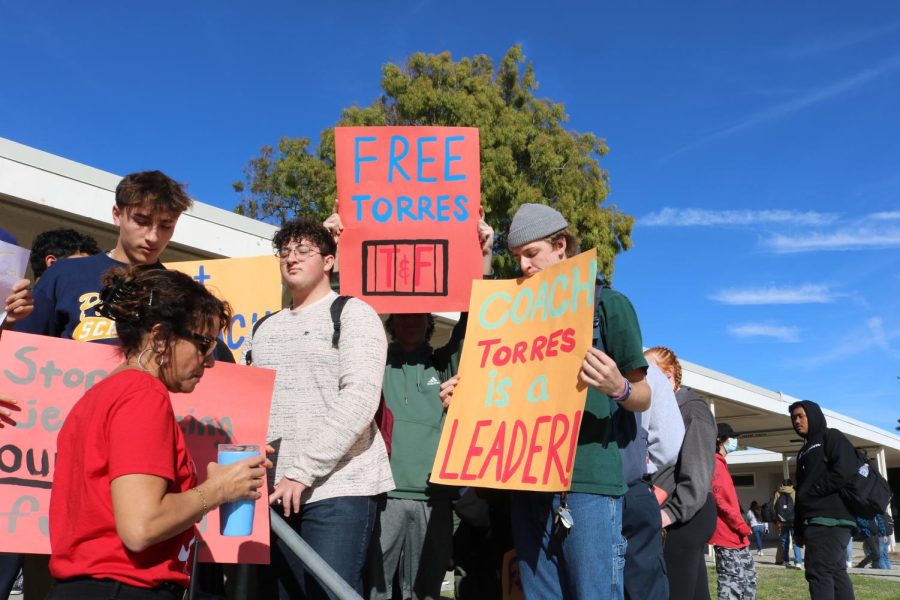 Principal Audrey Asplund walks passed the crowd of students with signs at the protest on the quad Tuesday, Nov. 8.

Buena boys cross country and track and field head coach Aaron Torres was fired from his position, but will remain in his teaching position until further notice.  The cross country season had just come to an end when an email was sent notifying track athletes of his termination Tuesday, Nov. 15.

In the email sent to the track team, principal Audrey Asplund welcomed the team to join them for a meeting during lunch that next day. Because the meeting was shared on social media by some of the athlete’s encouraging students to come “show support” for Torres, about 110 students attended the meeting.

“It was a difficult meeting in that there’s not a lot of information that students wanted that we were able to provide. And when a big group, there is a tendency to not be a lot of organized thought. It was a lot of really raw emotion,” assistant principal over athletics Tina Perez said.

Torres coached at Buena for 10 years, nine of which he successfully led the boys cross country team to CIF. This means that the class of 2022 senior athletes have gone to CIF all four years, this including his son, Michael Torres.

Many students felt blindsided by the news, having known him to be their coach only three days prior at the CIF-Southern Section finals.

Following the meeting, a student organized  “protest” was set for the next day outside the school administration offices. Track and field students joined by fellow supporters were seen holding signs and wearing shirts in support of Torres.

During this event students were met by assistant principal Tiffany Dyer with a clip board to sign up to to sit down with Asplund and voice their opinions directly. According to Dyer, five to six people signed up to take advantage of the offer to meet with Asplund.

“The meetings were awesome. They were long, they had really good questions and I think every person who left my office felt like they were heard,” Asplund said.

Torres has made his opinion clear that he will “never coach at Buena again” in a VC Star article posted Nov. 19. He will not be returning to his position, but athletes who have had him as a coach argue that it was not a good decision on the administrative side.

Senior Abigail Wood, who you can find both striking on the soccer field as well as racing on the track, has had coaching from Torres for about eight years.

“He has definitely become not just a coach for me,” Wood said. “He has genuinely become a mentor for me, like a father figure.”

Wood admires that Torres is a real human being and “lets everybody see the real side of him.”

Administration said that his care for students was not a factor in the decision that lead to his termination.

“His care for kids and his care for track had nothing to do with the issues at hand. No one was questioning that, that wasn’t an issue,” Asplund said.

The remainder of this year’s boys cross country season will be supervised by Coach Michelle Burns, as well as Torres’ former responsibilities regarding track and field. While not on a specific timeline, administration is working to find a replacement.

“Sometimes the process takes a long time, and sometimes you find the right person right away,” New athletic director Derek Rusk said. “You really want to do your due diligence to make sure you find that right person.”

While many students are still confused about the situation and are left with questions unanswered, administration is looking to move forward.

“We are not trying to ignore it or not see it or cover it up, but moving through is why we are all here as support resources,” Perez said. “I want the best coach possible at all times for all sports.”