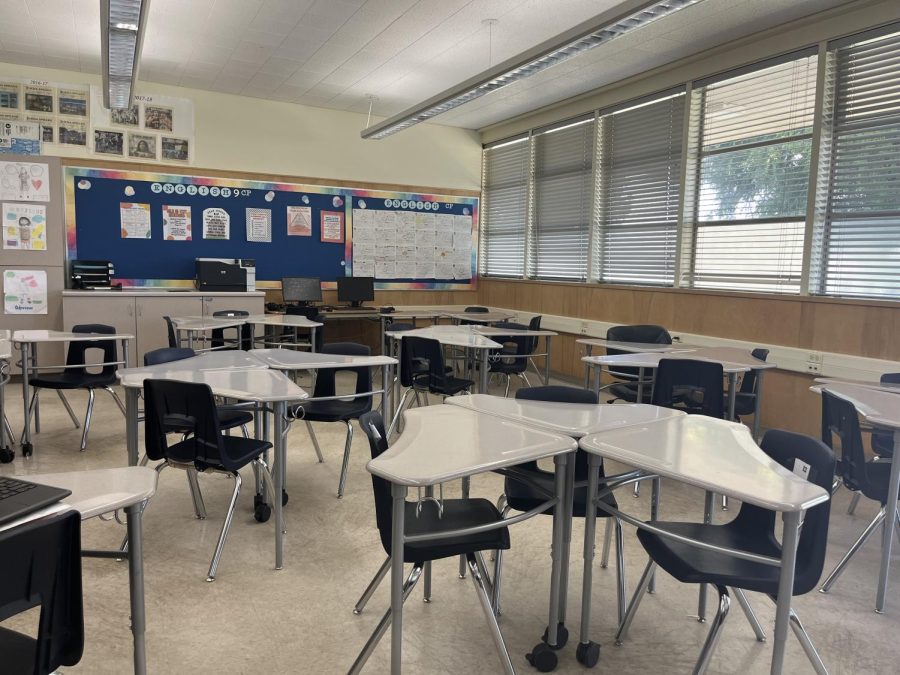 Declining enrollment has been seen in the state for years. Various elements combine to form a cycle of decreasing students.

An alarming trend of declining enrollment has plagued California for the past few years. This dilemma rings true in the Ventura Unified School District, and more specifically at Buena High School.

While the COVID-19 pandemic has played a role in the overall decline due to its economic impacts, it has been revealed that the data recorded “follows a modest, steady decline in public school enrollment statewide since 2014-15,” prior to the pandemic that began in March of 2020.

To tackle this issue, the Ventura Unified School District developed a Declining Enrollment Committee that will focus on the “long-term declining enrollment that has been occurring” in the district.

The reasons behind this trend are multifaceted and dynamic. It is currently hypothesized that one reason behind lowering enrollment lies with the rising cost of living in Ventura County and California.

In a committee meeting held March 3, 2022, it was noted that only “25% of California households could afford to purchase a median priced home,” with a home counting as an existing single-family detached home. In Ventura County, a median priced home is $849,000 and the minimum qualifying income to afford the home is $157,600. Only 24-27% of households in Ventura can afford such a home.

“The cost of housing in Ventura is very restrictive for some people,” Buena High School principal Dr. Audrey Asplund said. “It is very difficult to afford a place in Ventura for not just teachers but for families. Young families. . . that want to buy a house are moving to other states. . . where they could afford to buy a home easier than in California.”

According to a  Ventura County Star article released earlier in May, a census data report shows “a net emigration of 7,000 residents between 2015 and 2019, with the largest losses to Texas, Arizona and Nevada,” where the cost of living is significantly lower than in California.

An additional factor to declining enrollment may be the lowering birth rate, with fewer families having children. According to the same VC Star article, the number of children “under age 5 [have dropped] by more than 6,000 between 2010 and 2020.”

It is very difficult to afford a place in Ventura for not just teachers but for families. Young families. . . that want to buy a house are moving to other states. . . where they could afford to buy a home easier than in California.”

Ventura Unified District schools are funded based on the amount of students enrolled, according to Asplund. A decrease in enrollment leads to less funding and in turn, less classes are available to students. By cutting down on classes, there is less for schools to advertise in an effort to enroll more kids, resulting in a cycle of declining students.

In Buena’s case, the Choir class is at risk of being cut completely for the 2022-2023 school year. While declining enrollment is not the sole reason for Choir’s low recruitment, it plays a role in the long-run.

Choir teacher Kevin Downey believes that a main reason involves students’ perception of choir. “People just do not realize how much fun it is, and they are so stigmatized in our culture that ‘I might sing a wrong note and people will judge me.’”

With a class of only 17 students, Downey and the class would have to recruit at least three more in order to run the class next year. The choir class released their “Don’t Let Choir Expire” video that was shown on the morning announcements in an attempt to get more students to enroll.

“We did our last-ditch effort and we got three more kids to sign up.” Downey said. “I was told at one point that we might make the class run if we could get at least 20. I can not guarantee that they will be able to do that.”

A decrease in enrollment leads to less funding and in turn, less classes are available to students. By cutting down on classes, there is less for schools to advertise in an effort to enroll more kids, resulting in a cycle of declining students.”

Buena’s choir class began from Downey’s attempt to help out with the school musicals. By having kids in a designated singing class, he believed they would have more experience under their belts and as a result, perform better in those musicals.

Before long, choir had become more than just providing a chance to sing and practice. It became a chance for students to learn about the music industry, have fun and find their voice. Downey hopes to pull through another year and restore choir class to its former glory.

“When I first heard ‘We do not think it is going to run,’ I was bummed and it snuck up on me.” Downey said. “When I got home that night and told my wife ‘They are going to pull choir,’ I started crying. I did not realize how much it meant to me, how much I had grown to love the program and the kids and how devastating it would be to see it go.”