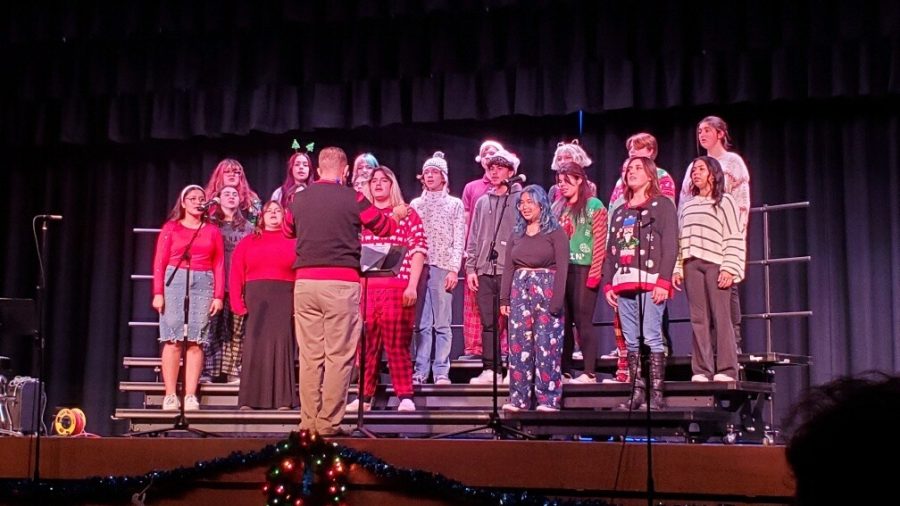 Dec. 14 2022, the Not-So-Silent-Night concert was held, combining all musical electives as well as colorguard to perform in one night, the first year this has ever been done; for the sixth year in a row, the Buena choir has brought their Not-So-Silent night album to our community. The show, which was composed of 27 performances, opened with Band Director James Rumenapp addressing the audience announcing that the concert was “the best” music Buena has to offer.

Choir opened and performed three songs, all of which were full of emotion and sounded phantasmal. They also sang in Hebrew for a Hanukkah song, “Shalom Chaverim”. The talent that the group displayed live made the group a crowd favorite, receiving loud and lingering cheers.

The next show stopping group to perform was the string orchestra led by Rumenapp. The performances were skillful, dynamic, and clean. The musicians were precise in their art and swept the crowd away in their music. Senior Juan Carlos Ozuna played prominent parts throughout the performance on his violin. For one of the pieces the group played, Ozuna wrote and composed his own solos to play, making the piece even more unique.

Following the orchestra, junior Elaine Paler came out to the stage to perform her cover of “My Song for You” from the Disney show “Good Luck, Charlie.” Her contagious smile and bright personality were not the only things the crowd loved, her performance of the sweet song was truly stellar and a must have from the album that is now officially available on Spotify.

After the remaining soloists featured on the Not-So-Silent-Night album performed, the jazz band took to the stage. They started off bold and strong, giving the crowd a catchy piece to listen to while making them want to hear more and indulge deeper into the world of jazz. The pieces sounded triumphant and consistently brilliant until their last piece.

We are proud of what we were able to accomplish,”

Intermission was buzzing with excitement and alive with energy, just as the rest of the spectacle.

“The talent the students have never ceases to amaze me,” assistant principal Tiffany Dyer said.

Intermission featured sales of the new album in CD form as well as jewelry and ornaments. The food trucks outside of the auditorium were also very popular throughout the night.

The last performances were by the concert band, wind ensemble, and marching band. The concert band played strikingly and valiantly, determined to close up the night with a bang. Equally dauntless, the wind ensemble played four superb pieces, even featuring selections from “Phantom of the Opera.”And the marching band closed up the night with their astounding fall show, “City of Lights.” The show was performed on ground level giving an intimate and exciting feel.

The 2022 Not-So-Silent-Night concert was an astonishing success with tremendous  musical diversity. To listen to the studio versions of some of these magnificent performances, the Not-So-Silent-Night album will be available on YouTube, Spotify, Apple music, and in CD form during the holiday season. The spectacle was a very special way to kick-off the winter break.

Directing choir and having a large part in the creation of the Not-So-Silent-Night album, teacher Kevin Downey reflected on the concert and newest album, “We are proud of what we were able to accomplish,” Downey said.