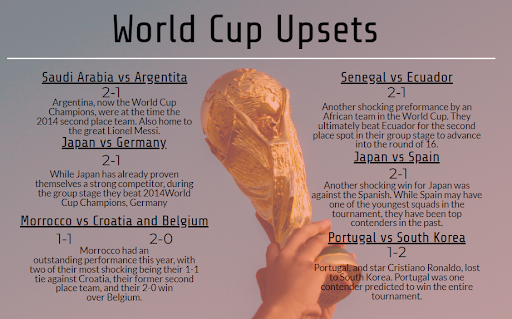 The 2022 Men’s World Cup in Qatar contained many firsts, upsets, and records. From an African team making it to the semi-finals for the first time in history, the man argued to be the G.O.A.T winning his first World Cup.

Prior to the start of the Tournament

The location and timing became World Cup firsts in 2022. This is the first time the tournament was being held in a Middle Eastern country and in the middle of  Winter. This was of course due to the immense heat in the area during the summer when it is usually held.

An often controversial topic regarding the building of the stadiums used in the tournament was the amount of slave workers and mistreatment that occurred. According to World Cup chief Hassan Al-Thawadi, between 400 and 500 migrant workers have died in projects connected to the tournament. This, of course, was due to Qatar’s current labor laws which include workers being controlled by their employers. Many employers will threaten termination or deportation to many of their migrant workers.

Another memorable event prior to the start of the tournament was FIFA President Gianni Infantino’s opening speech. His speech began with “Today I feel Qataris; Today I feel Arab,” and the list continued on for a minute including him feeling “African”, “Gay”, and “disabled”.

This later became ironic because many European countries planned to wear rainbow captain armbands in support of the LGBTQ+ community, however, just a day before the first team was set to play, they recalled that statement and said there would be further consequences to teams who wear the band anyway. Qatar is an anti-LGBTQ+ country guided by Islam and has many laws prohibiting it.

This was later brought up due to the sudden loss of an American journalist who was denied access by security to enter stadiums while wearing a rainbow hat. This journalist unfortunately passed away suddenly during the tournament, first causing speculation of foul play, later to be identified as suffering from an aortic aneurysm.

Qatar became the first host team to lose their opening match and to score a single goal then not advance out of the group stage.

The most highly anticipated match of group play was the USA facing off against England, as it drew about 19.9 million views to FOX Sports and Telemundo. The match ended up in a 0-0 draw, but had some great moments from English star Harry Kane and USA goalkeeper Matt Turner.

One of the most exciting men to watch in the World Cup is Mexican goalkeeper Memo Ochoa. After five years of entering the World Cup and 47 saves, his most memorable this tournament was his save against Poland’s Robert Lewandovski that kept the Mexican team alive.

France, the reigning champions, were placed in what seemed to be one of the “easiest” groups containing Australia, Tunisia, and Denmark. Brazil was also placed in an “easy” group with Switzerland, Cameroon, and Serbia.

The USA was eliminated in the first the Round of 16 after a 3-1 loss to the Netherlands. This was USA star Christian Pulisic’s first game post injury in the last game of the group stage against Iran.

One of the top contenders in the tournament is the dominant Brazilian squad and star Neymar Jr. In a tough match against Croatia, they ultimately lost in penalty kicks (2)1-1(4).

In the quarter finals, Morocco beat Portugal and their star Cristiano Ronaldo 1-0 to advance to the semifinals against France where they lost 2-0, then in the third place game where they lost to Croatia 2-1.

2018 World Cup champions, France, and 2014 second place team, Argentina, were two of the most watched and anticipated teams in the tournament were set to face in the 2022 Men’s FIFA World Cup final. France went undefeated in the entire tournament, even after losing Karim Benzima, one of their many strong forces, prior to the tournament to injury. Argentina however, had one of the overall strongest squads including Lionel Messi. ™

Argentina was strong right from the whistle and almost immediately took the lead. Messi scored in the 23’, soon followed by Angel Di Maria in the 36’. Argentina continued to have more shots than France and held them off for the half.

In the second half, with only 10 minutes left, France’s star forward who helped give the team the win back in 2018, gave France hope once again. In the 80’, Kylian Mbappe put in a penalty kick for his country, followed by a second goal only one minute later, sending both teams into overtime.

Once again, Messi scores in the 106’. And then, once again, Kylian Mbappe scores in the 118’ on another penalty kick. This game gathered seven yellow cards. After several more opportunities on goal, and an amazing save by Argentine goalkeeper Emiliano (Emi) Martinez, they were sent to penalty kicks.

And again, the first two players up were Messi and Mbappe who both put their shots in the net. Argentina then scored their next two goals and France missed both of theirs. France only scored one more time and Argentina finished the job securing their win. One of the most popular debates over the G.O.A.T of soccer was believed to have ended in that match. After winning over 30 trophies in his career, winning La Liga with Barcelona, and finally a World Cup title, Lionel Messi is the greatest soccer player of all time.